I love stewed rhubarb – with Weetbix, with icecream, with milk, warm from the pot, in a crumble, you name it and I will love it.

Rhubarb can be tart/sour so it is usually sweetened with sugar before eating.  Cooking it with a piece of scraped ginger root can reduce the need for sugar, but I find another method works even better.  This was told to me by an elderly gentleman many decades ago (he also was a rhubarb fanatic and had umpteen containers of stewed rhubarb in his freezer).

Slice the rhubarb into pieces as normal, cover with cold water and bring to the boil.  Strain off the water, then barely cover the rhubarb with more cold water.  Bring to the boil and simmer until it reaches your desired level of softness (some like it to remain in pieces, others to let it cook down into a mush).

Stir in sugar to sweeten, if using. 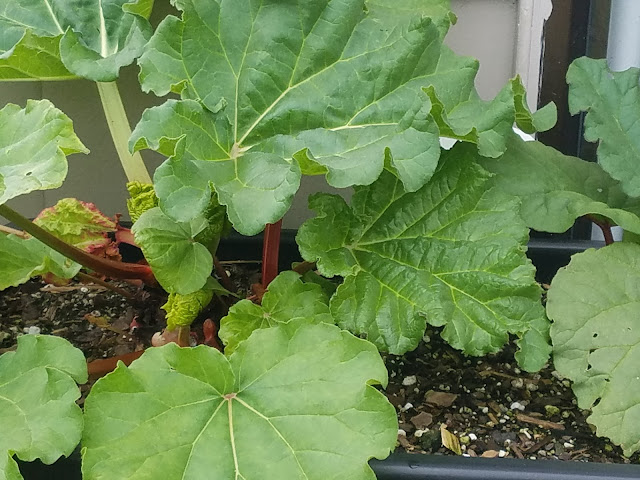 This picture is of our present rhubarb plant.  It got transplanted this year into a trough and a new one was planted beside it (son’s idea – he reckons rhubarb gets lonely and needs to have a companion!).

It is growing well and almost ready to take a harvest from.  I won’t take too much off it this season as I want to give the crown time to recover from being moved, and will take nothing from the new plant.

The gentleman mentioned above used to say if you grew rhubarb and silver beet (Swiss chard) in your garden you would never go hungry.