What Did You Say?

Another week has whizzed by, leaving me wondering what I’ve done all week!

I suppose I have achieved some things – several cupboards in the kitchen have been rearranged, my recipe book is being overhauled, and I have watched a few movies on Netflix (does that rate as an achievement? LOL).

We did have one good giggle during the week.

Chris Hipkins, our Covid Response Minister (who is also the Minister of Education), made a huge faux pas when speaking live at a televised press conference.

He said, “It is a challenge for people in high density areas to get outside and spread their legs when they are surrounded by other people.”

Apparently it was a totally innocent remark (he meant “stretch your legs”), but the press and social media have been having a field day with it.  The memes that have proliferated have caused a lot of laughter around the country.

Have a happy week everyone,

What better activity in lock-down is there, than to clean everything in sight!

Our neighbour started it.  First the net curtains were all taken down and washed, then the windows scrubbed, and the whole room was turned out before they moved to the next room.

When the sun shines they are outside, hosing down the exterior of the house and pottering around in their garden.  I even saw the wires on the clothes line get given a wiping over.

It started off another neighbour.  Over the last few days they have pulled almost everything out of their garage and are obviously sorting it out and generally tidying up.

I should explain, I am not simply being nosey!  We live at the end of a cul-de-sac and it is impossible not to notice what each other of us is doing.  Our houses are not so close together that we can reach out our windows and touch each other, but they are still only metres apart.

Anyway, it has started me off cleaning as well!  I’m calling it an early Spring Clean, especially as spring officially starts in around a week’s time.

The kitchen got a good clean not so long ago, but I have started there again and have thrown quite a few items out.  Surprisingly, it makes quite a bit of difference when there is only two people to provide for instead of three.

Do you have any favourite activity to do during stay-at-home lockdown?

Email ThisBlogThis!Share to TwitterShare to FacebookShare to Pinterest
Labels: home

Our weather today is cool and cloudy but only the odd shower is forecast.  I wrote an email to my daughter this morning and am about to have lunch (mushroom soup and toast today).

This afternoon I will probably curl up on my bed and continue browsing through Harmsworth’s Household Encyclopedia!  There are six volumes altogether, and they contain the most fascinating information about domestic life and interests one hundred years ago (the books were published in 1926). 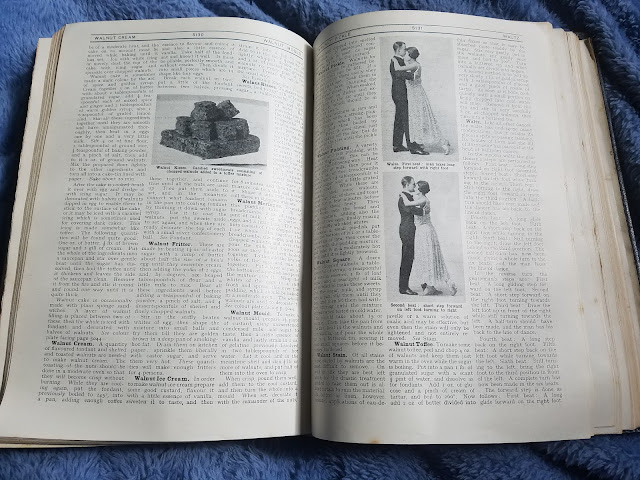 I’ve read how to make my own clothes and household items (patterns included, as scale diagrams), how to keep house, keep a garden, and care for domestic animals.   There are sections on cookery and social etiquette, as well as different hobbies.

Some things have not changed much over the years, but others are radically different.  This is what the start of the article on washing machines says:

“The main principle adopted in most types of washing machine is essentially the same.  The clothes, together with the washing mixture, generally some variety of soap and hot water, are placed in a closed box or cylinder of wood or metal which is fitted on spindles in the frame of the machine so that it is easily revolved.  The process of washing is accomplished by rapidly turning the cylinder on its axis, either by hand or by electric power.  A reliable machine of this kind will wash clothes as clean or even cleaner than is possible by vigorous hand rubbing, and such fragile materials as lace or net may safely be entrusted to it.”

Sounds a bit different from my automatic washing machine that is so smart it can tell how much water to use and has different wash cycles available for different items!

Have a happy day 😊

But, today, I am not busy.  New Zealand has gone into lock-down after community cases of Covid (Delta variant) were reported in Auckland.  So, it is stay-at-home for all except essential workers and those needing to access essential services. 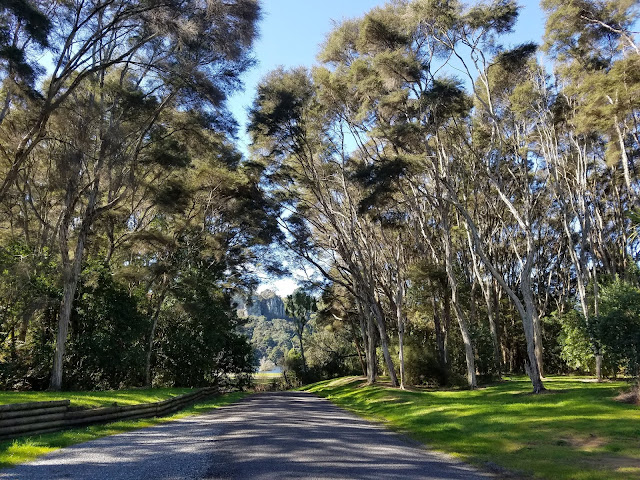 The last week has been a busy one for me.  I have attended a parole board hearing for a family member, been a babysitter for a few hours, spring cleaned my bedroom, caught up with several different family members, and had my first Pfizer covid vaccination jab.

The day following my ‘jab,’ I had a very sore arm (I heard it described as a “dead arm” and thought that summed it up quite well), and then had alternate flushing and cold chills for about twelve hours.  I felt alright though, so figured it was just my body doing what it was meant to do and I am fine again now.

We have had quite a bit of rain the last few days, but the sun is making a valiant attempt to shine now.  We are only expecting a high of 13 degrees Centigrade today, so it is still chilly outside especially in the wind.

Our household ‘bubble’ is well prepared for this lock-down, as we felt it was inevitable that it would eventually happen.  So we had no need to join the crowds swamping the supermarkets last night (supermarkets remain open anyway, as an essential service).  The CEO of one chain said their sales were up 50% yesterday, with the biggest items sold being toilet rolls, flour, sugar, and pasta.  What is it with toilet rolls?  The country manufactures them,  and there never is a shortage.

Everything is so peaceful at the moment.  The main road is quiet – no traffic noise!

Electric Cars and So Forth

Are we becoming too reliant on electricity?  Most of New Zealand is currently in the grip of a major cold spell and last night our national electricity consumption reached an all-time high – with the result that several areas were shut down completely for several hours to “conserve” power.

The use of electric and hybrid cars is being actively promoted here (with cash incentives to purchase, and the penalisation of ‘bigger’ petrol-fuelled vehicles such as those that most farmers rely on for their work), and I have been wondering about the long-term effects of all this.

A friend of my son’s owns an electric car and, because he reckons there will be continual power outages over the next few years, he has purchased a diesel generator so he is always able to charge his car!

So why own an electric car?

The manufacture of such vehicles involves the use of steel and other resources, the same as petrol and diesel vehicles.  Which leaves the only point of difference being the fuel used.  I watched a disturbing documentary recently about the effects of mining lithium for batteries, and I know from my experience with solar batteries that old used batteries are very difficult to dispose of, so are electric cars any more environmentally friendly than petroleum-fuelled cars?

In towns and cities I can see huge benefits in using these quieter, ultra-low-emission, vehicles, but most of our country is rural.  We are a widely scattered population and public transport is not all that efficient, if not non-existent, outside of the major urban centres.

If we all switched to using electric cars the results would be catastrophic.  Our electricity production is already at capacity – so much so, that the mothballed Huntly Power Station is now operating again and burning thousands of tons of imported coal to supply the national grid.

LPG Gas is soon to be banned, meaning no more domestic gas heaters can be used (oh, wait, I think they intend to replace it with highly flammable rock gas).  All rental properties must now have high-wattage heat pumps installed in them.  Many localities have banned home fires because of the smoke upsetting the air quality.  The only way people have to keep warm is using electricity.

An electrician friend informs us he has been busy lately upgrading house supply lines as too many homes are now using more electricity than the lines supplying them can cope with.  I didn’t even know they had a limit!

I cannot see any easy answer for the future.  Do you?

Wishing everyone a very happy week,

Email ThisBlogThis!Share to TwitterShare to FacebookShare to Pinterest
Labels: environmental

And Rain Shall Not Stop Them

I have great respect and admiration for arborists, especially after learning how gruelling their training can be.

Not only do they need to be fit for such a physically demanding job, but they also need to have extensive knowledge about trees and a comprehensive understanding of their equipment and how to remain safe while using it.

This morning, after having a gorgeously sunny day yesterday, we have constant rain with the occasional heavier bouts.  But that never stopped these workmen. 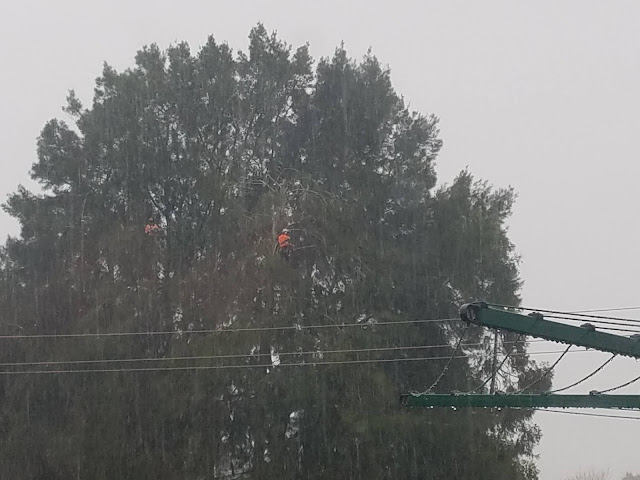 They climbed their trees and trimmed the branches, even though it was raining, and the ground crew put the dropped limbs through their mulcher.

I was afraid they were going to take down all the trees but thankfully they have not – at least at this stage!

Sorry for not being that ‘present’ online at the moment.  I seem to be having a bit of down-time from the computer – too much TV viewing of Olympics perhaps?

Anyway, I hope everyone is having a happy week 😊