What is “hate speech”?  It seems to be becoming a more common term around the place and I wanted to find a definition of it.

The Cambridge Dictionary defines it as “public speech that expresses hate or encourages violence towards a person or group based on something such as race, religion, sex, or sexual orientation.”

Different countries apparently have different legal interpretations, but basically it is what it says – a public statement of hate for someone or something.

Does this include your personal opinion?  Or does it only apply to those who belong to an organised group?  Is there any difference between saying “I really hate Person A” to saying “Someone should shoot Person A”?  It seems to be a very fine line between the two.

A lot of discussion is happening here at the moment because the government is looking at bringing in new legislation that, as it is presently written, would limit the expression of free speech.

We already have legislation that is designed to limit the active inciting of violence or hatred.  We have laws against terrorism and racism and sexism and ageism, and even against political criticism.

Who decides what is hatred, or even what is insulting?  If you say something and it offends someone, will that make you a criminal?  Seems ridiculous, but it could become that way.  I would feel much happier if the government would clarify things a lot more than they currently are.

Freedom, including freedom of speech, is something we take so much for granted in our Western world, but is the pendulum starting to swing towards more control over individual liberties?

Sometimes I wonder, and worry, about the world we live in and where it is headed.

Email ThisBlogThis!Share to TwitterShare to FacebookShare to Pinterest
Labels: thoughts

As many of you know, I recently house and pet sat for my brother and his wife while they were away.  I visited them yesterday, and my dear sister-in-law gave me the prettiest scarf and a bag for a thankyou gift.

I adore the colours in this scarf, and it is so light and soft that I am sure it will be a pleasure to wear. 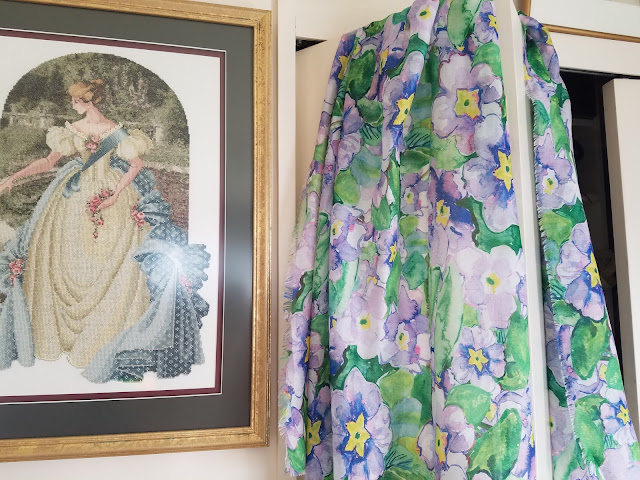 The jute bag, with a sweet penguin on the front (all the way from Oamaru, where they watched the Little Blue penguins coming ashore in the evening), is the perfect size for my laptop, which will be marvellous whenever I take it out somewhere with me.

We had heavy rain overnight and it is threatening again now (mid-morning).  We used to say that wet weather was only any good for ducks – but I think the blackbirds love it more!

The lawn was almost alive this morning, with several blackbirds hopping around and feasting on all the worms that had come to the surface because of the wet ground.

(The cross-stitch and bead lady, in the picture, was worked by my mother several years ago – I know how long it took her to do, so it is something I treasure)

Email ThisBlogThis!Share to TwitterShare to FacebookShare to Pinterest
Labels: gifts

What Is A Widow?

Yesterday I was speaking to an elderly aunt, who not long ago lost her husband of fifty-nine years, and she had been told she must write “single” down as her marital status.  She does not regard herself as “single” and fully intends to continue using her husband’s surname and not revert to her maiden name.

I had a similar experience after my husband died – I wrote “widow” on an official form and was told I had to write “wife” or “single.”  I don’t consider myself to be in either of those categories, so I insisted on writing widow – the official who took my form carefully wrote “wife” after my widow so that I became a “widow wife”!!

When did the term widow become an unmentionable word?  I know “spinster” is not fashionable (they seem to be called bachelorettes nowadays), and anyway, they can call themselves unmarried.  But what word is used to replace widow?

When asked our marital status we are allowed to put separated, divorced, married, unmarried, de facto – why not widowed?

It all seems a bit of ridiculous “politically correct” officialdom to me, and so I will continue to call myself a WIDOW!

What do you think?

Email ThisBlogThis!Share to TwitterShare to FacebookShare to Pinterest
Labels: thoughts

Today is the first day after our shortest day – it is one second longer!  Traditionally the winter solstice has always been a time of renewal and the start of new things, but today most of the people that I know are not even aware of it.

It seems Society is becoming so out of touch with the natural cycle of seasons and the change of daily rhythms.

So, am I doing anything new?  Well, not really, but there are two things I would like to do.  One is get back to writing more blogs, and the other is changing the type of meals I cook.  I lost interest in food over the last few years (through grief and depression) and have found it difficult to get started again.  I always used to love my food!

I wondered if experimenting with a new style of cooking might make things more interesting.  I’ve always been a middle twentieth century Kiwi cook – the meat and three veg, with dessert to follow, type of cook.  Son is in agreement with me, and says he is willing to try anything new.

Which meant today (our power was off all day so it was perfect day to get out of the house) I went shopping!

I came home with this lovely wok-pan for making stir-frys, risottos, and such like.  Tonight it is a bit of a throw-it-all-in and hope-for-the-best type of dinner.  Wish me luck! 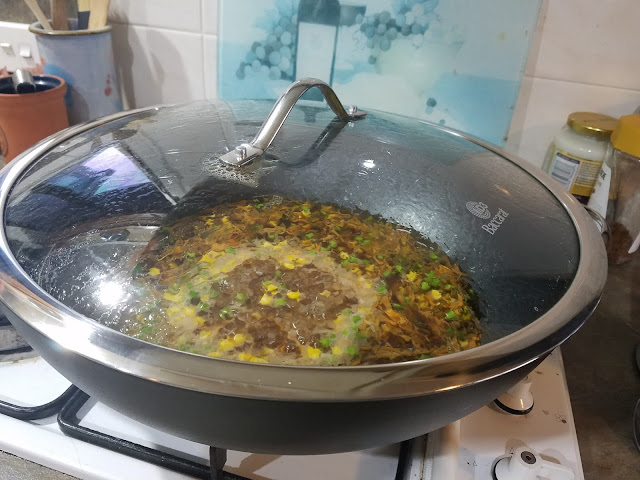 If anyone is interested, it is a Baccarat wok that I found in Farmers Trading Co. – the price tag was a bit hefty at $240.00, but at 40% off on special it was worth the purchase.

There is nothing quite like sleeping in your own bed!  As much as it is nice to have a break or go on holiday, it is always nice to come back home to the old familiar things and the bed that seems to have moulded itself into your particular shape. 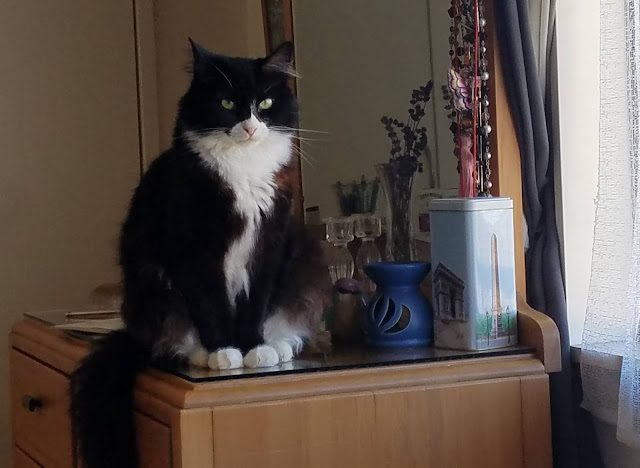 Both granddaughter and myself have been away the last ten days (different places, different reasons), which left son at home alone with the two cats and four rats.

I arrived home yesterday and granddaughter came back today – the rats were totally unimpressed, but Mittens and Millie were thrilled to see us. 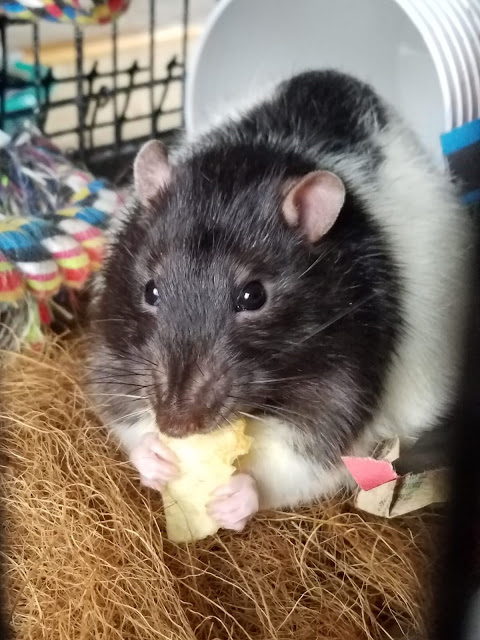 It was fish and chips for dinner tonight, a bit of a treat.  Being a Monday night, the place we normally go to was shut, so we tried another shop and it was just as good if not better.  Guess where we will go next time!

Email ThisBlogThis!Share to TwitterShare to FacebookShare to Pinterest
Labels: happydays

I could just call it being lazy, but it sounds better if I say I have been on holiday!

I am once again house and pet sitting for one of my brothers and his wife, while they are away on a road trip, and decided to have a thoroughly lazy weekend.

I made a special trip to the supermarket on Friday and came home with enough ready-made meals to last me the whole weekend.

This smoked salmon salad was what I had for dinner last night (tonight it will be roast beef and veggies, Friday night was a mince potato-top pie). 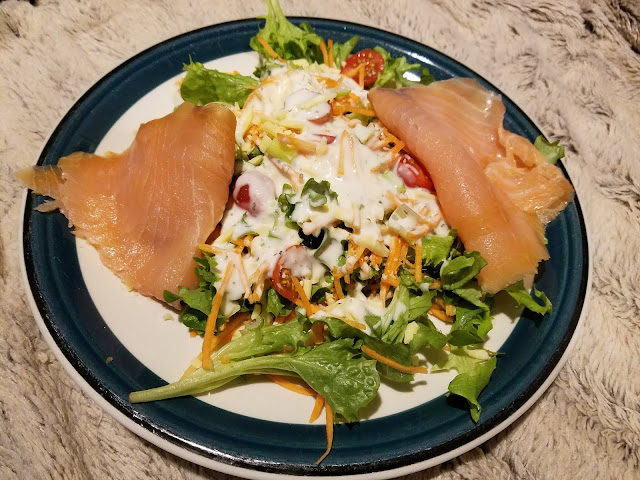 Not all my food has been “healthy” – I also bought Mallowpuff (chocolate and marshmallow) biscuits and a couple of small microwaveable chocolate steam puddings.

Mandarins are healthy though!  The Satsumas are now in the stores and I love their juicy sweetness and the way they are so easy to peel, although later in the season they are inclined to lose their sweetness – that is when it is time to switch to the normal mandarins.

The last few days have been full of fog and drizzle, so I have chosen a cheerful picture to remind me that summer is never too far away.

The last couple of days have been rather dreary, with very little sunshine and lots of rain.  It has not been that cold though, but a warm lazy fire seems to cheer everything up around it. 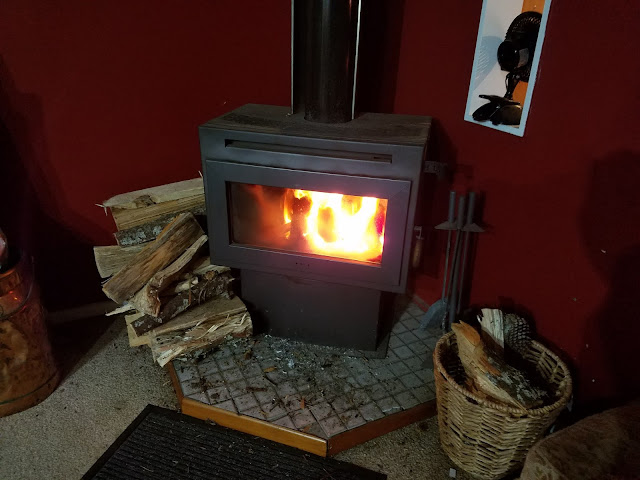 Many years ago (sometimes I feel old!), I spent a few years living in a house with no electric cooking facilities.  We had a coal range to use (it also heated all our hot water).  The warmth that old range put out had a special quality about it, seeping into the bones like nothing else did.

I used to be amazed at any visitors we received as they used to gravitate towards the range and stand with their backs to it.

I used my spiralizer again tonight and cooked up a mushroom stir-fry with ribbon carrots and courgettes, plus cabbage, cauliflower, brussel sprouts, celery and noodles – all made tasty with some soy sauce and sesame oil.  Grand-daughter even went back for seconds! 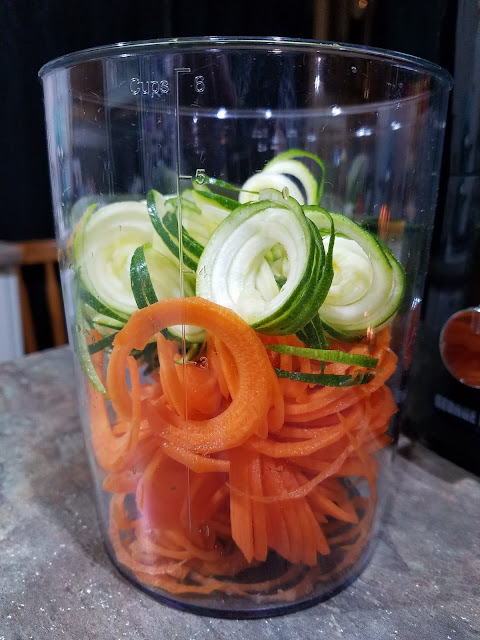 It has been a holiday in New Zealand today (Queens Birthday weekend) but the day has gone by the same for us as every other day does.

Wishing everyone a very happy and productive week ahead 😊

Email ThisBlogThis!Share to TwitterShare to FacebookShare to Pinterest
Labels: home

I must be feeling financial at the moment as I have splashed out on an unnecessary kitchen appliance – a George Foreman Spiralizer.  It is the electronic way of turning courgettes, carrots etc. into ribbons of noodles.

I used it last night and forgot to photograph the container full of long narrow strips of carrot, courgette, and kumara (sweet potato) – it was quite colourful.

I snipped the long lengths into shorter ones to make them more manageable and then added them to our stir-fry.  I mean, I could have used a knife to cut them into matchsticks or something, but this was much more fun! 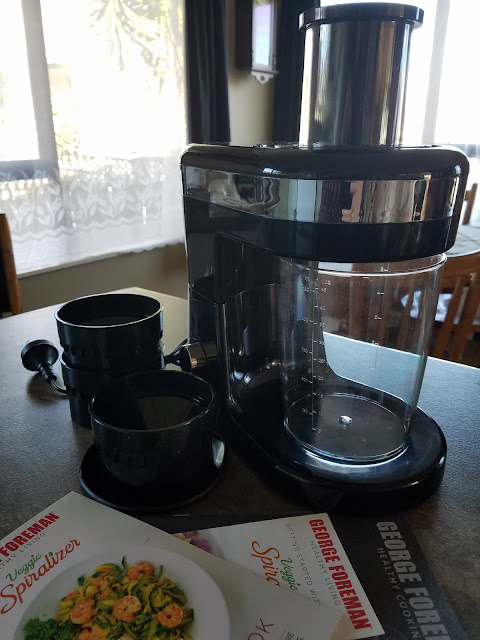 Our weather is definitely on the cooler side now, and we are lighting the fire most nights.  Thankfully we have missed the heavy rain that has flooded Canterbury (one friend there has had to evacuate, but hoping to get home again today).

It is only three more weeks until we reach the shortest day – which I always feel should mean things will begin warming up, but they normally get colder after that.  It seems to signal more the start of winter than the middle of it.

I had a happy time on Monday night visiting my youngest grand-daughter.  I don’t get to see her very often, but this was her eighth birthday and I was thrilled to be able to spend some time with her.

Have a great week everyone 😊