The good old humble cabbage is becoming a luxury vegetable!  Yesterday I paid $6.99 for a very small cabbage – and am determined that absolutely all of it will be eaten.

Our first meal from it was Cole Slaw – finely sliced cabbage with grated carrot and grated cheese.  I used to add finely chopped onion as well, but the Rats share what we eat and onion is not good for them.  I compromise by snipping up some spring onion and sprinkling that over the top of mine.

Cole Slaw goes best with a creamy dressing of some kind, but I often just use a sprinkle of olive oil instead.  Probably because I like my Cole Slaw to be fresh and crunchy – hubby used to like his after it had sat for 24 hours as he said the flavours mellowed together better.  Each to their own! 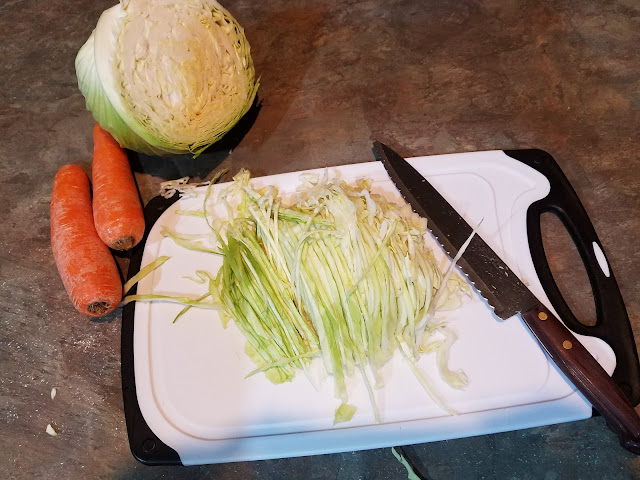 New Zealand Statistics have announced an overall increase in food prices of 8.3% for the year to August, led by a 15% increase in the price of fruit and vegetables and accompanied by big increases in the cost of eggs, meat, yoghurt and cheddar cheese.  No wonder our basic grocery shop has been getting more expensive!

The gloomiest part of their announcement was that there would be no change in the foreseeable future and prices may still rise further.

It makes one realise how dependant we are upon supermarket chains to provide for most of our food needs.  Perhaps it is time to return to the past a little – grow your own, preserve the excess, cook from scratch, eat seasonally, be thrift-conscious when buying things.  All things we used to do but have largely dropped in the name of convenience.

By the way, we ate the Cole Slaw with boiled potatoes and baked sausages.  Delicious!